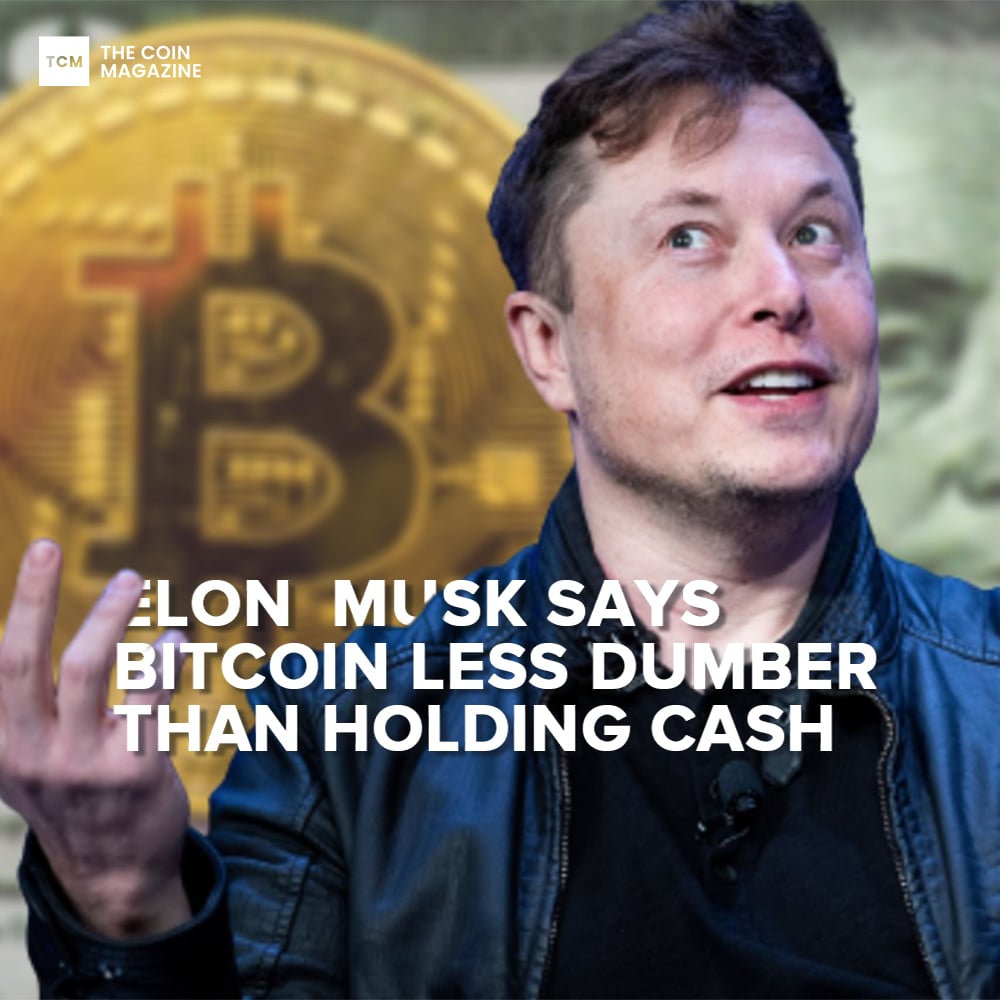 Elon Musk’s muse with Bitcoin and cryptocurrency seems to be scaling new heights each day. After tweeting about Bitcoin and Dogecoin a few weeks ago, Musk has once again made an interesting comment on Bitcoin.

Bitcoin Investment Not as Dumb as Holding Cash: Elon Musk

Bitcoin price has been surging for quite some time now. 2021 has been an extremely eventful year for the most robust cryptocurrency as the price has almost doubled since the beginning of this year. Recently Musk’s autonomous vehicle company, Tesla, announced buying Bitcoin worth $1.5 billion, and the price of the crypto token skyrocketed above $52,000 post the announcement. Elon Musk, who is known for his adventurous stint on Twitter, started an array of Tweets talking about its decision to buy Bitcoin and not Dogecoin. Interestingly, Elon Musk is a supporter of Dogecoin and has spoken about the Meme inspired token many times.

Musk tweeted that “Tesla’s action is not directly reflective of my opinion,” He added that it is good to hold some Bitcoin.  “Having some Bitcoin, which is simply a less dumb form of liquidity than cash, is adventurous enough for an S&P500 company.” As per Elon Musk, cryptocurrencies, especially Bitcoin, is a rather smart investment option because central banks are offering minimal interest rates on cash. He added that the fiat currencies are giving almost negative real interest, and it would be foolish to invest in fiat and not look for alternatives. Since the government regulated currency is not backed by any commodity, it is like Bitcoin. He added that “Bitcoin is as BS as fiat money.

Bitcoin has grabbed massive mainstream attention lately, with major financial players joining the crypto bandwagon. Leading banks like JPMorgan and Morgan Stanley are considering rolling out Bitcoin investment services to their institutional clients. Leading financial services providers like MasterCard and Visa have announced support for Bitcoin and cryptocurrency on their network. Uber CEO showcased possibilities of accepting Bitcoin for payments of its ride and food delivery services. In a pathbreaking decision, the Miami administration announced that the residents can now pay taxes for the municipal services in Bitcoin as well. All these instances showcase that Bitcoin is gaining mass acceptance, and thus investment in Bitcoin is a smart choice as described by Elon Musk.

Natalie describes herself as a nomad, entrepreneur, and investor following the bitcoin space and mindfulness. She blogs about cryptocurrency investments at thecoinmagazine.com.